A Day in the Life: Bat Caretaker Pt. 2

This week I was hoping to give you some history behind the bats in my care; how they came to need the services of WRSE, but I’m feeling far too playful for that today. Today I’d rather tell you about their little personalities, and how, even within the same species, they can be completely different.

Now, you should know that within the wildlife rehab world, we generally refrain from naming any animals in our care.  They are only with us for a relatively short while and we don’t want to encourage much attachment between staff and wildlife. Though we do care for the wildlife that we treat, it is important that they remain wild and keep a healthy aversion to people in order to avoid negative human-wildlife interactions. The only named creature we currently have at WRSE is a Great Horned Owl dubbed Cecil (I’ll blabber on about him some other time) but that’s because he is a permanent resident.

So … back to the point I was about to make:  Although the bats in my care do not have Anglo names, I sometimes refer to them by other labels – some not so flattering!  You’ll see why. 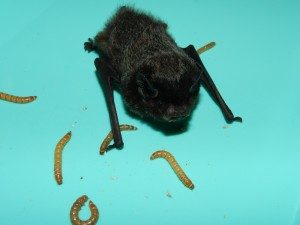 The Silverhaired (SHB for short) bat is gentle, sweet, and shy.  I often refer to her as “Sweetheart”.  Her little face is strikingly beautiful; she’s very lady-like (for a bat) and loves to crawl under my collar after she’s finished her feeding-time.   Silverhaired bats seldom self-feed while in captivity, so hand-feeding her daily is a necessity.  After she’s had her meal, topped off with a refreshing bit of water, she crawls up under my collar and purrs.  That’s right!  Bats purr!!!  Now, I do understand that she is a crevice bat (meaning they hide in crevices) and that my collar is just a reasonable substitute for her to hide in and not  what I prefer to believe is a snuggle but hey, please just allow me my delusions!

The Big Brown bats (BBB for short) are feistier than “Sweetheart” – waaay feistier!  Both BBBs are males. (Oooh, could it be a testosterone thing??)  They are also excellent self-feeders while in captivity, so I don’t need to handle them as often. 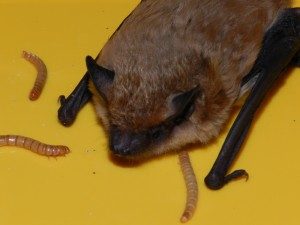 BBB#1 – I usually refer to him as “Handsome”, but sometimes “Butthead” springs to mind!  He’s the more aggressive of the two.  The way he eats his dinner is hilarious! I’m trying to get video for you… keep checking back!
Picture this: The mealworms are all in a large, deep plate.  BBB#1 crawls into the plate, plunks his tuckus down, surveys the yummy morsels before him and then quickly darts his head forward to snatch up a worm.  The funny thing is he sometimes snaps his head back so fast that he almost flips himself over backward!  Cirque-de-sol-Batty!

There are still a few occasions in which I need to hand-feed him.  However he’s such an aggressive eater (think: shark feeding frenzy) that he sometimes mistakes my finger for a big fat juicy worm!  I feed him using tweezers, but still have to hold him in my other (gloved) hand.  The moniker “Butthead” springs to mind when his BILLION needle-teeth stick into my finger and won’t let go!  Okay, I’m exaggerating about the billion teeth … but not the ‘hurts’ part! Never pick up a bat in the wild if you don’t have adequate protection. Though it is rare, bats can carry rabies, and your safety is of utmost importance! 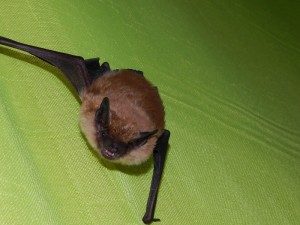 BBB#2 – Most of the time I refer to him as “Gorgeous” but he holds the championship on nicknames!  Depending on his behavior, he can be “Doofus”, “Squirmy-wermy”, “Mr. Wiggle-pants”, “Cheeky Monkey” and “Poopyhead”.  He’s the most troublesome (and adorable) rascal yet!  His feeding habits are daintier than BBB#1.  He does not like to eat everything in one sitting.  He’s more like the proper English ladies sitting down to tea and crumpets; a little nosh here, and a little nosh there, and a good long time to finish the whole bit!  On the rare occasions that I need to hand-feed him he is the squirmiest, most uncooperative cheeky monkey I have yet to meet!  And I mean that in a loving way!  He only wants his worms tweezered to him in a certain way.  His body position has to be just so.  His water has to be served at just the right moment.  Otherwise, he makes the whole episode into an epic drama.

That’s it for this week! I hope you enjoyed the photos, and I hope you have seen at least one way in which they are all wonderfully unique.  More to come!