A Day in the Life: a Concerned Wildlife Volunteer 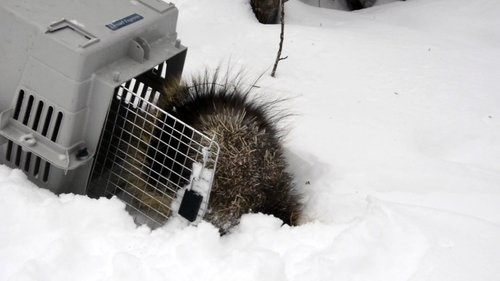 The things you never think you will do.  For me rescuing an injured porcupine probably fell into the category of “who…me?” Yet here I was, watching a porcupine limping like it had a broken leg. 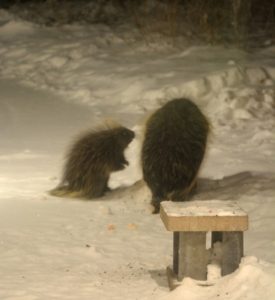 At first, I was amazed that it was able to navigate in the freezing and snow, and wondered how long before it was eaten or simply died.  As he hunted for seeds around the bird feeders, I felt bad for him, but thought that “mother nature” would do her thing soon. But after a few days, I spotted him again, still hobbling on three legs, still determined to beat the deep snow and freezing cold for a few morsels of birdseed that had fallen to the ground.  As I watched him this second time, I began to feel terrible about not helping him, not really knowing how to help him. I thought if I put out some apple it would help him ward off the cold a bit more – but he limped away quickly as soon as the door handle moved.

I thought about him overnight – gaining respect for his strength and marveled at his intelligence.  He was a survivor!  At that point, I knew if I saw him again, I had to help him.  After calling the Wildlife Rehabilitation Society of Edmonton for advice, I planned my trap!  The next time he came to the house for some seeds, a large Rubbermaid container would be used to trap him, and then transfer him into a kennel so he would have some air and a bit more room overnight. Sounded easy enough…so I watched and waited…and hoped he would make it back to the yard again!

The next morning, after we successfully captured him, the 45 minute trip to the rehab facility was easy. Once at the WRSE, the porcupine was sedated and assessed.  By the time I got back home, he had a full work-up, and Kim happily reported that the leg injury was an infection, probably due to an embedded quill!  It was not broken so would be an easier recovery!

He was put on antibiotics, the wound drained and cleaned, and he was allowed to recuperate for almost two weeks before he was well enough to come back to his territory!  While he was gone, his little family came to the house almost every night – maybe they were looking for him…maybe they were happy there was less competition. I will never really know. 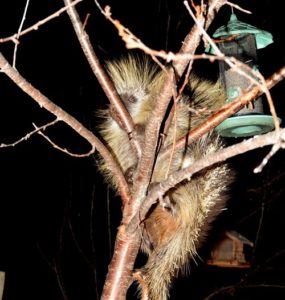 We got him back to the property just after a huge snowfall.  We took him to a treed area near the back of the property to release him.

For the next week I watched for his return to the house – peering out three or four times during the night. I was delighted to see him back at the house about a week later – he had rejoined his little family and our prickle were back at the arguments over who would get to eat the seeds first!

Since then, we have startled each other on several occasions, and each time I am thrilled to him back in my yard!

Many thanks to Kim and the Wildlife Rehabilitation Society of Edmonton staff for caring enough to help our wild friends.